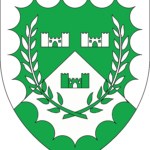 When the Canton of Anrhyfedd’d dissolved in 1986, the Kingdom Seneschal ceded its land to Vatnaskvadstadir. Vatnaskvadstadir and Belle Rive contemplated how best to divide the land of Anrhyfedd’d, but after discussion with the people of Caer Penbledd, the three groups decided to join together and form a Barony.

Further discussion was had, and on October 3rd, 1987, their Majesties Randal and Marieke invested Morgan Arianblaidd and Megan ni Laine as the founding Baron and Baroness of Stonemarche.

Per chevron vert and argent, three castles within a laurel wreath, all within a bordure invected counterchanged.

… But what is “Giggleswick“?